Looking ahead, retail sales are likely to remain subdued. The key driver of consumer spending is household income, and the two factors driving that – wages growth and employment growth are both struggling.

A lower Australian dollar together with unparalleled uninterrupted years of economic growth continues to attract foreign based investor interest. 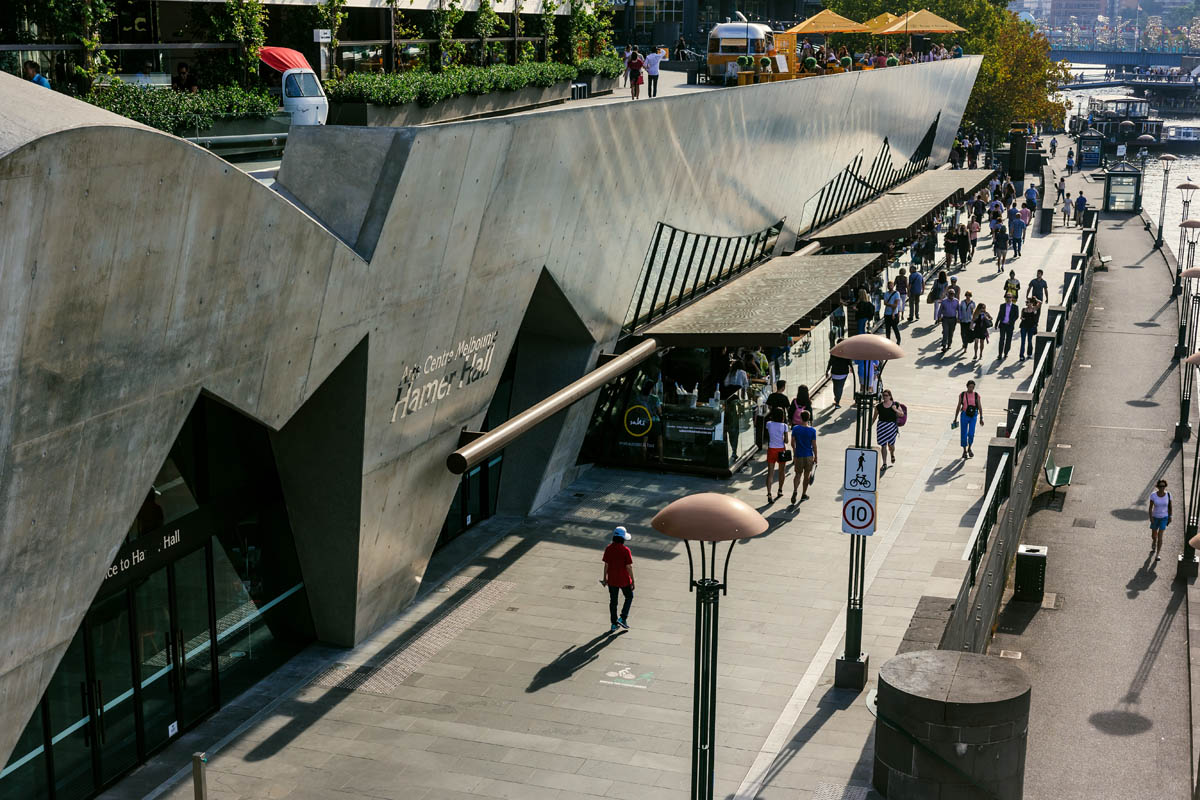 Within Victoria, investor interest is strongest for CBD-based assets, highlighted by US-based real estate investment management company TH Real Estate purchasing a 30% stake in the Myer Centre for $150 million and local unlisted property fund manager ISPT’s acquisition of 206 Bourke Street for $116 million. However, the difficulty of acquiring these assets has resulted in investors converging on neighbourhood shopping centre investment opportunities.

Within the CBD retail specifically, sustained demand compared to relatively limited investment opportunities in the CBD market, resulted in a firming of CBD retail yields over the past year with prime yields for freehold retail ranging between 3.0% and 4.5%. 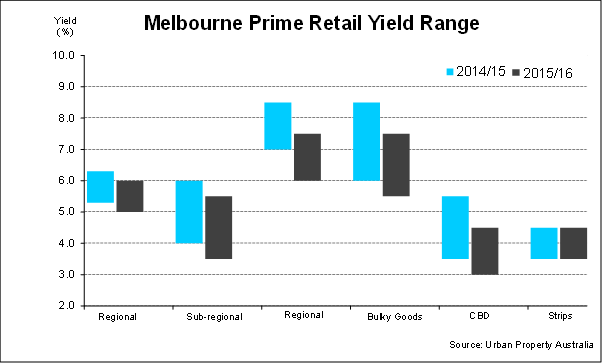 Australia’s retail sales remain underwhelming with monthly retail trade only rising by 0.1% in June 2016 to $25.044 billion. Over the first half of the year, year-on-year growth rate slowed to just 2.8%, the weakest annual growth since July 2013.

According to the National Australia Bank, online retail sales rose by 0.8% in June, down from 2.2% growth in May, but lifting online sales for the year to June by 13.5% to $20.1 billion. Online sales at domestic retailers rose 1.1% in June and 16.9% over the year, while international sales rose 0.5% in June and 0.9% year-on-year as the weaker Australian dollar made offshore purchasing less appealing. Domestic spending now accounts for 80% of total online retail sales, compared with 75% three years ago, when the Australian dollar was at near-parity with the US dollar.

By retailer size continues to show small retailers registering little or no growth with sales growth slowing for large food retailers but maintaining solid momentum for other large retailers (5.7% over the year).

Looking ahead, retail trade is likely to remain subdued. The key driver of consumer spending is household income, and the two factors driving that – wages growth and employment growth are both struggling. Over the past year, growth in wage rates was the slowest on record, while the number of wage-earning hours worked rose at less than half the normal pace. 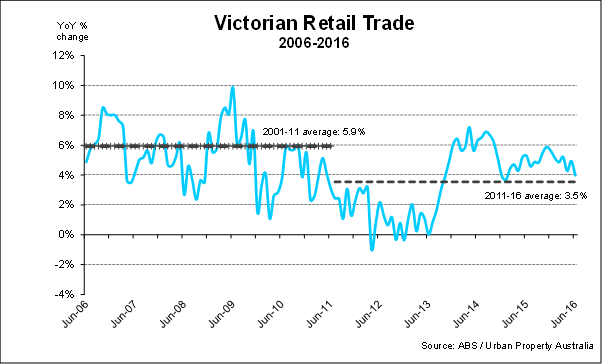 The overall vacancy rate had fallen from 9.5% to 7.0% over the four years. Glenferrie Road, Hawthorn and Church Street, Brighton recorded the tightest vacancy rates of 2.1% and 2.3% respectively while Bridge Road remains highest amongst the prime retail strips at 13.6%.

Tenant demand has been driven by food-based retailers and service retailing occupants boosted by the population growth that has resulted from the number of apartments recently completed close to the popular shopping precincts.

Private investors continue to dominate retail strip sales activity which has only further intensified with the emergence of the self-managed super funds coupled with record low interest rates. Investment demand for strip retail assets remains intense with transactions demonstrating yields between 3.5% and 4.5%.

Over the past three years white collar employment has grown by 13,751 workers in the CBD, while the residential population has increased by 21,455 over the same period. Total inbound tourism numbers into Melbourne grew by 13.3% to 2.4 million over the 12 months to May 2016.

Currently Melbourne’s CBD retail vacancy is sitting at its lowest level in five years with vacancy falling from 3.2% to 2.0%. Over 2016, most of the incoming tenants into the Melbourne CBD comprised occupiers from food retailing and clothing sectors, boosted by the new residents.

New retail supply within the CBD retail remains confined to the refurbishment of a number of existing centres capitalising on the continued demand from international retailers. Recent refurbishments include Emirates House, located between Swanston and Elizabeth Streets while St Collins Lane which stretches between Little Collins and Collins Streets was recently completed.