With COVID cases more prominent in Melbourne than any other Australian city, similarly the pandemic has adversely impacted the Melbourne residential market more than elsewhere. Melbourne house prices have fallen the most across Australia, declining back to 2017 levels while vacancy rates have risen to eight-year highs. Urban Property Australia believes that there remains a risk of further falls in house prices given the historically low immigration and rising unemployment.

Melbourne house prices have fallen by 5% over 2020 to date, having peaked in December 2019. Melbourne house prices have now fallen to 2017 levels with prices having fallen for four consecutive quarters. Interestingly, Melbourne apartment prices have held up better than houses, having recorded only a fall of 1% over the year to September 2020. While the trend of housing prices in Melbourne has been far the weakest across Australia, with restrictions starting to lift and private inspections once again permitted in October, the pace of the decline of dwelling prices is expected to moderate. However, there remains a risk of further falls in house prices given the historically low immigration and rising unemployment. 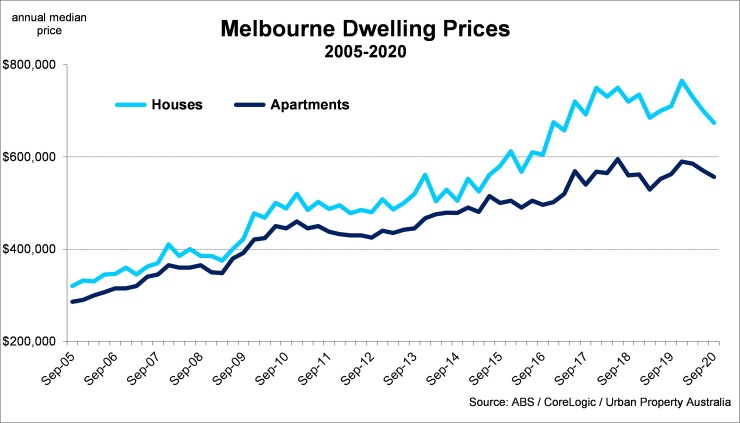 According to the ABS, there are currently 66,200 dwellings under construction across Victoria. Although the current dwelling supply pipeline of Victoria is below the peak of March 2018, the number of dwellings currently under construction remain 17% above the 10-year average. Looking even further ahead, Urban Property Australia forecasts that Victoria’s housing pipeline will decline significantly, with both overseas and interstate migration to contract as a result of the COVID-19 pandemic slashing demand. In the 12 months to August 2020, a total of 62,200 dwellings were approved in Victoria, 6% lower than the five-year average. Reflecting the slowdown of the development of apartment developments, approvals for houses now account for 41% of all dwellings, compared to 52% in late-2015.

Despite the economic uncertainty, total Victorian housing finance commitments have remained above the 10-year average for 2020 to date, underpinned by owner occupiers. In terms of the composition of loans, the proportion of loans to first home buyers has risen to 31%, well above its 10-year average; whereas investor loans now account for 25% of total loan, significantly below its 10-year average. While finance commitments remain above average, both house and apartment transactions remain under the 10-year average with total dwelling sales in Victoria 14% lower than the 10-year average, reflecting the restrictions of the pandemic on activity. Given that international migration accounted for 63% of Victoria’s population growth, Urban Property Australia expects that demand for property in Melbourne will remain subdued for the short term. 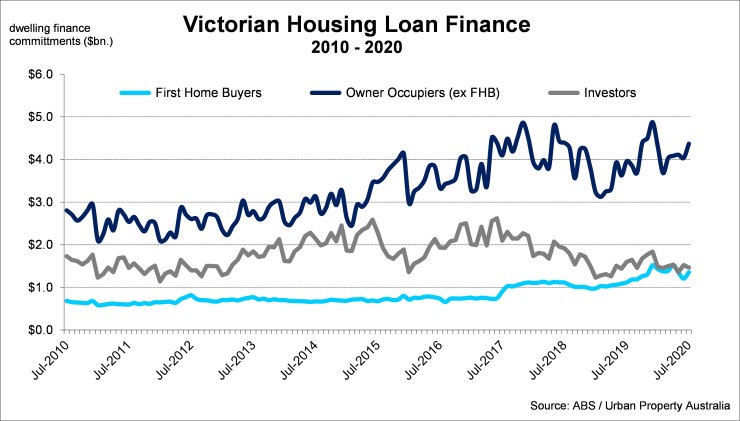 Highlighting the diverging impact of the pandemic, according to the REIV, Melbourne metropolitan weekly rental levels for houses have risen to all-time highs whereas, rents for apartments have declined sharply. Over the year to August 2020, the weekly median rent for houses in metropolitan Melbourne rose to $480 per week, up from $450 per week a year earlier. In contrast, the weekly median rent for units has fallen to $400 per week, down from $430 per week a year earlier. Although, rents for apartments in the outer suburbs grew by 0.5% over the past 12 months, rents for apartments in the inner and middle suburbs declined over the year. Apartment rents have been impacted by the softening demand for apartments which has been impacted by the weak labour market conditions across the hospitality and recreational sectors.