Having surged in the first quarter of 2021, Melbourne house and apartment prices have increased to all-time highs as at March 2021;

Vacancy rate for Melbourne residential property continues to rise, having now reached its highest level in 15 years, rates have almost tripled over the year;

Melbourne house prices have surged in the first quarter of 2021, having grown by 5.6% to reach a new all-time high as buyer demand consistently outweighs new advertised supply. Buyer demand has been underpinned by owner occupiers, particularly first home buyers who recently accounted for 41% of all loans. In contrast, the vacancy rate for Melbourne residential property continues to rise having almost tripled over the year leading to rents to decline.

Melbourne house prices have surged in the first quarter of 2021, to fully recover the losses experienced during the pandemic. Over the first quarter of 2021, according to CoreLogic, Melbourne house prices have grown by 5.6% with Melbourne apartment prices having grown by 3.0% over the same period. Both Melbourne’s house prices and apartment prices have reached all-time highs as at March 2021. Melbourne’s housing market strength is being supported by a disconnect between demand and supply. Total advertised listings remained extremely low throughout 2021 to date with buyer demand consistently outweighing new advertised supply. The tight market conditions can also be seen in auction clearance rates, with the Victorian auction clearance rates consistently held above 80% in 2021 to date. 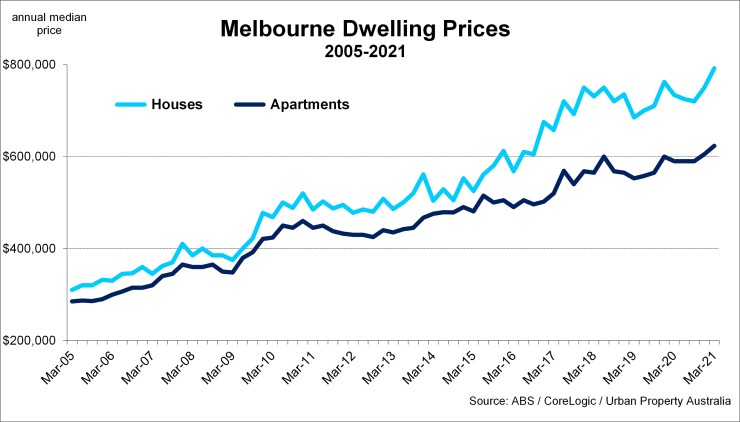 According to the ABS, there are currently 64,600 dwellings under construction across Victoria having trended down since 2018. Although the current dwelling supply pipeline of Victoria is below the peak of March 2018, the number of dwellings currently under construction remain 12% above the 10-year average. The closure of Australia’s international borders is also expected to reduce demand for inner city rental housing given the likely lack of international students in the short term. A shift in preferences towards detached houses has also been weighing on demand for inner city apartments. However, near-term risks of oversupply – and therefore sharp price declines – are mitigated by the considerably smaller volume of higher-density inner city apartments due for completion in 2021 relative to previous years. In the 12 months to February 2021, a total of 61,200 dwellings were approved in Victoria, 7% lower than the five-year average. Reflecting the slowdown of the development of apartment developments, approvals for houses now account for 67% of all dwellings, compared to 51% as at February 2016.

In response to a range of factors including record low interest rates and recent economic conditions that have consistently beaten forecasts, Australians are feeling optimistic and confident in making high commitment decisions related to the property market. In response, total Victorian housing finance commitments reached 20-year highs in December 2020, underpinned by owner occupiers. While owner occupier finance levels fell by 0.8% in February 2021 commitments remained at historically elevated levels. As at February 2021, total Victorian housing finance levels is 45% higher than levels 12 months earlier. In terms of the composition of loans, the proportion of loans to first home buyers has risen to 41%, well above its 10-year average; whereas investor loans now account for 24% of total loans, significantly below its 10-year average. 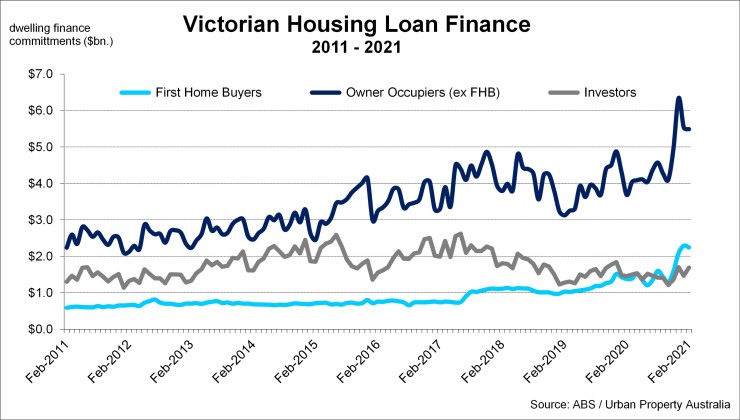 According to the REIV, as at February 2021, the vacancy rate for Melbourne residential property has risen to 6.0%, its highest level in 15 years, having almost tripled over the year, up from 2.3% as at February 2020. With the exception of the Outer suburban region, vacancy levels of all precincts have now reached 15-year highs. As at February 2021, the residential vacancy rate increased to 7.9% in the Inner (0-4km) precinct and 6.5% in the Middle precinct and 2.5% in the Outer precinct. Looking ahead, Urban Property Australia projects that the vacancy rate for the metropolitan Melbourne area will remain elevated for the short term, particularly in the Inner precincts given Victoria’s population growth will be muted for the medium term, constrained by the closure of Australia’s international borders affecting the international student market.

Emulating the vacancy trends, according to the REIV, metropolitan residential rents fell across Melbourne’s regions over the year to February 2021 with the exception of dwellings in the Outer suburbs. While rents generally fell across Melbourne, apartment rents in the Inner precinct recorded the greatest decline, falling by 11% over the year to February 2021. Over the year to February 2021, the weekly median rent for houses in metropolitan Melbourne rose to $485 per week, up from $480 per week a year earlier. In contrast, the weekly median rent for units has fallen to $410 per week, down from $450 per week a year earlier. While rents have declined over the year, there are emerging signs that the rental market is stabilising with rents relatively stable since November 2020. Looking forward, Urban Property expects that residential rents will gradually increase through 2020 as the broader economy continues to improve following the shock of the pandemic, however increases will be constrained with Australia’s population growth likely to be modest for the medium term.

Copyright © 2021 by Urban Property Australia All rights reserved. No part of this publication may be reproduced in any form, by microfilm, xerography, electronically or otherwise, or incorporated into any information retrieval system, without the written permission of the copyright owner.