The recovery in the Australian economy is well underway. The lifting of restrictions in Victoria has contributed to a further improvement across a range of indicators of economic activity. Employment has recovered faster than previously expected and has supported growth in household spending. Extraordinary policy measures have continued to support household and business cash flow and balance sheet positions.

The economy is now transitioning beyond the initial ‘snapback’ phase, which was underpinned by favourable health outcomes, the faster-than-expected lifting of activity restrictions and very substantial policy support. The nature and speed of the next phase of the domestic recovery remains uncertain and is expected to be uneven for some time yet.

Beyond the risks associated with the virus, a key uncertainty is how Australian households and businesses respond and adapt to the tapering of some fiscal and other temporary support measures in coming quarters following the extraordinary boost to cash flows they received last year. 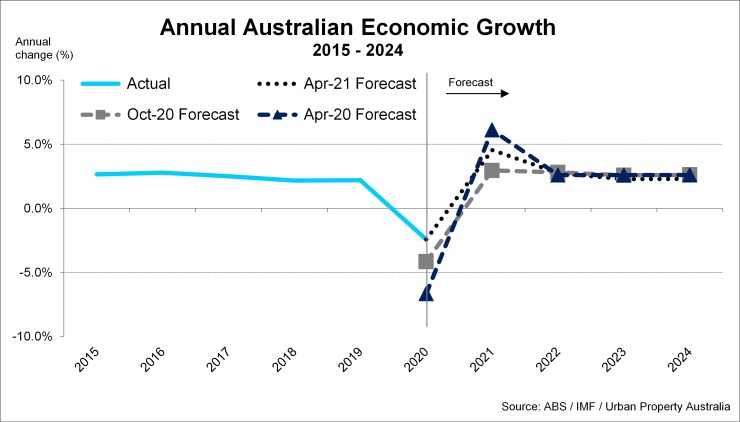 The recovery in New South Wales and Victoria has been more restrained than elsewhere, due to mobility restrictions and the larger effect on these states of international border closures. Full-time employment has only just recovered back to pre-pandemic levels however the unemployment rate remains much higher than a year ago.

Economic activity rebounded over the second half of 2020 at a faster pace than expected. The Australian economy rebounded by 3% in the September 2020 quarter, following a 7% contraction in the June 2020 quarter. The main contributor to growth in the September quarter was household consumption, which increased by 8%, supported by growth in household income, the lifting of restrictions and a reduction in precautionary behaviour. Public investment and dwelling investment increased but business investment declined in the quarter.

Indicators of economic activity have, for the most part, picked up since September, and GDP growth has been underpinned by the continued recovery in household consumption.

As a result of the stronger than previously forecast recovery, GDP and employment are expected to reach their pre- pandemic levels over the course of 2021, around 6–12 months earlier than previously expected. The unemployment rate is likely to have already peaked and is now expected to decline steadily to around 5.25% by mid-2023.

Employment increased by 280,000 people in the December quarter to be a little below its February 2020 level. Much of the increase in recent months has been in Victoria, where employment rebounded as restrictions in that state eased, while employment in other states has continued to recover at a more moderate pace.

While the number of people employed part-time has returned to its pre-pandemic level in late 2020, full-time employment has only just recovered; with 5,500 more full-time workers in February 2021 compared with February 2020. The recovery in part-time work has been fairly widespread across industries, with the level of part-time employment in most industries back to, or above, pre-pandemic levels; the accommodation & food services industry is a notable exception.

Forward-looking indicators of employment such as job advertisements and vacancies have continued to improve in recent months. Job advertisements remain below peaks seen in recent years, while vacancies are now above pre- pandemic levels. Although the outlook is mixed across industries, forward indicators of employment intentions have picked up strongly since mid-2020. Employment in restriction-affected industries, such as tourism and education are still expected to decline over the year ahead. In the construction sector, near-term employment intentions in apartment and non-residential construction are also subdued, but employment in detached home construction has been strong, especially in Western Australia. The outlook for employment in infrastructure-related businesses is picking up as projects get underway.

Household consumption recovered strongly over the second half of 2020 but remains below its pre-pandemic level. Household spending increased in the December quarter, supported by favourable health outcomes, an improvement in labour market conditions, a return of consumer sentiment to around pre-pandemic levels and policy measures that have boosted household cash flow. The categories of spending that were most constrained by activity restrictions earlier in the year rebounded quickly as social distancing restrictions were eased, such as cafes & restaurants and clothing & footwear. Sales of household goods remain elevated, having benefited from the substitution from services where consumption possibilities are still constrained.

Health and other pandemic management spending over recent quarters contributed to a 6% increase in public demand over the year to the September 2020 quarter. Public investment was unchanged over the year, although most states released budgets that foreshadow a large increase in investment spending over the next few years. Projects flagged by state government budgets included large and small infrastructure projects and the construction of social housing. The consolidated deficit of the Australian and state governments is expected to peak at just under 15% of GDP in 2020/21.

Copyright © 2021 by Urban Property Australia All rights reserved. No part of this publication may be reproduced in any form, by microfilm, xerography, electronically or otherwise, or incorporated into any information retrieval system, without the written permission of the copyright owner.