Reflecting the Australian economy, currently there is a major divergence of performance between the cities, with vacancies in Sydney and Melbourne falling and Perth reaching 20-year highs.

Offshore investors were the most prominent purchasers in the metropolitan office market accounting for almost half of the total sales having becoming increasingly accustomed with the market. While most purchasers were focused on pure investment opportunities, increasingly offshore groups and local developers are purchasing assets for residential conversion purposes. 820 Whitehorse Rd, Box Hill ($18.2 million) and 221 Pelham, Carlton ($18.0 million) were amongst a number of metropolitan offices recently purchased in 2015/16 which are earmarked for residential development.

Melbourne continues to host the second lowest vacancy rate amongst all of Australia’s CBDs. While Sydney is leading the office recovery, Melbourne’s CBD office vacancy fell to 7.0%, its lowest rate in three years. While demand for Melbourne CBD office space was a third of the long term average, for the first time on record no new stock was delivered to the CBD office market. With new supply in the medium term expected to be well below average levels the Melbourne CBD office vacancy rate is forecast to remain relatively constrained, leading to strong rental growth.

Since 2014, Sydney and Melbourne have firmly cemented their positions as global cities in the context of office investment capital. On purely financial metrics, Sydney and Melbourne still provide a significant yield premium when benchmarked against other major cities. With Melbourne CBD office prime yields sitting around 5.5%, compared to those of New York 4.6% and Hong Kong of 4.1%, this spread is expected to continue to result in yields compressing further with interest remaining robust. Investment interest in the Melbourne CBD remained strong in 2015/16, with sales volumes achieving the highest annual level on record. Office investment sales activity in 2015/16 within the Melbourne CBD totalled $3.1 billion, almost double the 10-year CBD sales annual volume average. 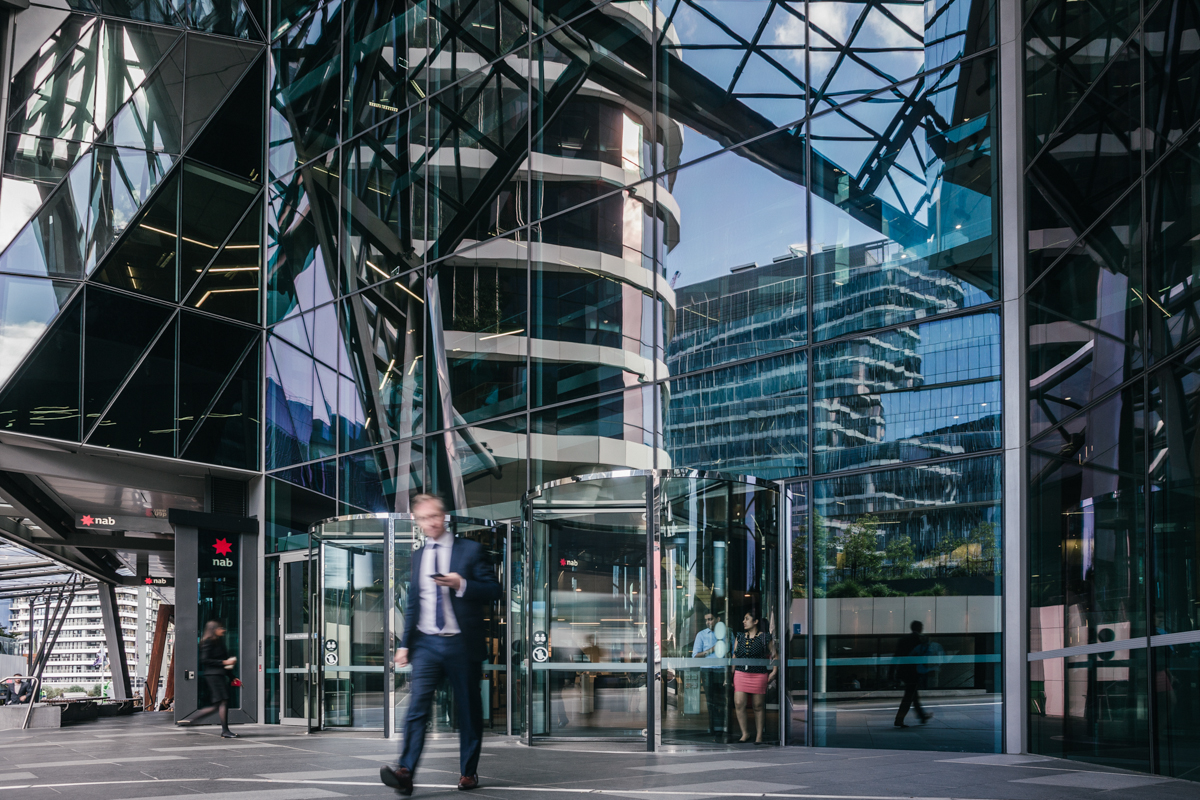 In the St Kilda Road office market, total vacancy improved from 9.3% to 7.3% over the 12 months to July 2016 due to 31,460sqm of office buildings withdrawal for residential redevelopment. Office stock in the precinct has now shrunk by 20% from its peak in 1992.

In the Southbank office market, vacancy rate halved from 9.1% to 4.6% in the year to July 2016 due to 13,589sqm of withdrawals, its highest level of annual withdrawals on record. In terms of new office supply, Mirvac and ISPT’s jointly owned 21,000sqm development at 2 Riverside Quay, Southbank is scheduled for completion later this year having been pre-committed by PwC.

By state, employment growth in June was concentrated in Victoria with 24,000 new jobs, and South Australia, 4,600 jobs. More broadly, employment strength is evident in the south-eastern states of NSW, 3.2% growth in the year to the June 2016, and Victoria, 3.4%, which are benefitting most from lower rates and a lower dollar. There is emerging weakness in the mining states of WA with employment falling by 0.6% over the year and employment in Queensland only recording annual growth of 0.3%.

According to the Australian Bureau of Statistics, over the year to May 2016, Victorian employment growth was largely driven by the health care, construction and retail trade sectors. In terms of traditional white collar employment sectors, employment levels continues to be mixed with the finance sector growing, while employment in the professional services and public services sectors contracted over the 12 months to May 2016.

Looking ahead, the labour market will likely regain momentum over the second half of this year, consistent with positive fundamentals. With low interest rates driving a home building boom and the lower dollar boosting labour intensive service sectors, such as education and tourism, the prospect for solid employment gains near-term is positive.

White collar employment growth is forecast to continue to gather momentum across Victoria with employment in the suburbs projected to increase at a faster rate than both the CBD and St Kilda Road office markets, which should result in office space demand increasing with tenants’ preference for space closer to the CBD with good amenity. 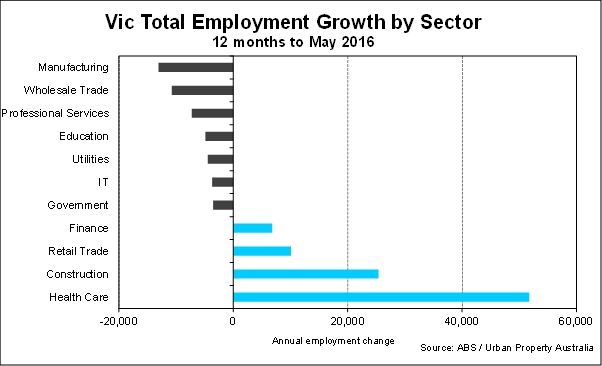 Having recorded its highest level of new supply since 2009 in 2015, the pipeline is more constrained with new supply levels forecast to fall below the historical average with 40,000sqm expected to be delivered this year. Mazda’s office in the Mulgrave Office Park was recently completed while Repco’s office at Stamford Business Estate and the speculatively developed office at the Chadstone shopping centre are both nearing completion. New supply is further constrained with the increasing level of suburban office stock being permanently withdrawn for a change of use, particularly for residential development. The largest building withdrawn over the past year was 850 Whitehorse Road, Box Hill (7,345sqm) by the Asian Pacific Group. Over the short to medium term, the level of suburban office market withdrawals is anticipated to increase with 62,316sqm earmarked for potential conversion. 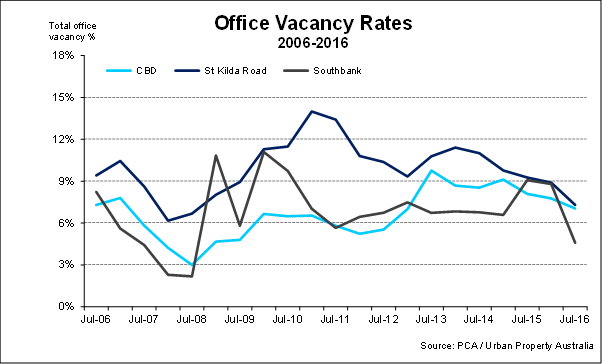