Despite new supply running double the long term average, somewhat surprisingly, the vacancy levels of the Inner Melbourne precinct fell over the last year. With 19,900 apartments under construction however, vacancy levels are tipped to rise.

Within the City of Melbourne, population is expected to experience an increase of over 77,600 people to 181,325 by 2031. In order to accommodate this population growth it is forecast that a further 40,400 households will be required.

Of the 77 new developments currently under construction, 54% of the apartments are located in the CBD Core, followed by 17% in Southbank with 12% located in the Docklands precinct. 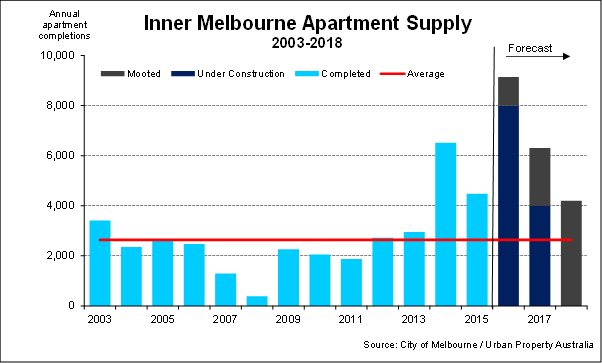 The Foreign Investment Review Board (FIRB) Annual Report for 2014-15 was released on 8 April 2016. According to the report, the FIRB approved a total of $194.6 billion worth of proposed investments across all industry sectors that fall within the scope of Australia’s Foreign Investment Policy.

Residential (at 31.2%) and commercial (at 18.6%) property represented 49.8% of all proposed foreign investment in 2014-15. Growth was recorded at 30% over the year to reach a total of $96.9 billion. Continuing to drill down into the property sector, approvals for Chinese nationals to purchase Australian residential and commercial property tallied $24.4 billion in 2014-15.

The Inner Melbourne region (CBD and 4km surrounds) comprises over 58,000 apartments. Since 2002, the residential apartment stock has almost trebled from 22,000.

The Inner Melbourne precinct is a relatively young residential population with the average age of residents at 28 years, with more than half (52%) aged 20 to 34 years – a result strongly influenced by the large cohort of international and domestic higher education students.

Immigration into the Inner Melbourne precinct continues at a substantial rate with the Asian nations China, Malaysia and India contributing 39% of all residential growth according to the latest ABS census data.

Somewhat surprisingly, the current vacancy levels of the Inner Melbourne precinct is only 2.4% as at June 2016, having fallen from 2.8% recorded in June 2015, despite the record levels of stock added to the precinct over the last two years. The relative constrained levels of vacancy may reflect that the majority of the recently completed apartments are held by offshore investors who are not offering the dwellings for rent.

Inner Melbourne apartment rental levels remained steady over the year to June 2016 with a median weekly rent of $410, higher than the metropolitan average of $395 per week which increased slightly over 2015/16. Interestingly, apartment values in the Inner Melbourne region experienced a decline of 0.8% over the June 2106 quarter which may reflect the impact of the recent spate of new development.

The unprecedented level of completions within the Inner Melbourne precinct is likely to lead to an increase in vacancy, regardless if much of the recent completions remain held by offshore investors. As a result of boosted number of completions, capital growth for several years is likely to be restrained with boutique developments in fringe locations increasingly popular with owner occupiers and renters. 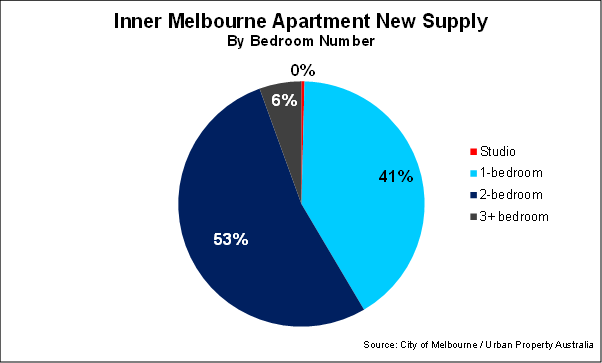