Global economic conditions remain robust, with global growth for 2018/19 projected to remain at its current level having recorded a steady expansion since mid-2016. At the same time, however, the expansion has become less balanced and may have peaked in some major economies. While global growth is projected at 3.7% for 2018/19, the rate was revised down from earlier forecasts, reflecting the recently announced trade measures between the United States and China. Global financial conditions have marginally tightened over the past six months, although they remain accommodative and generally supportive of growth. Growth in advanced economies are expected to decline from 2020 as the US tax cuts are partially reversed and as working-age population growth slows. 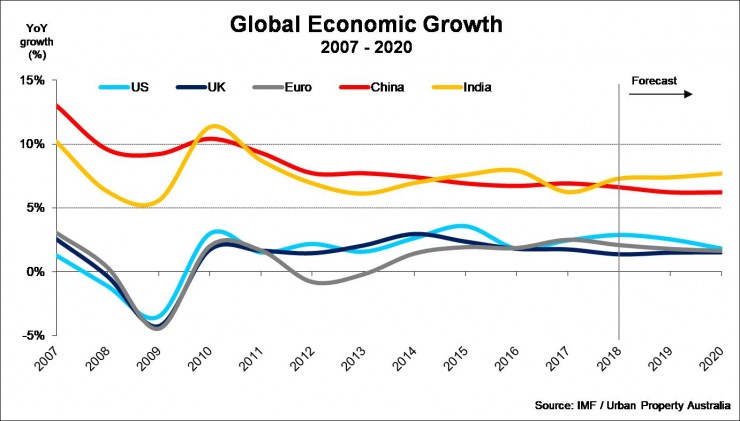 Australia’s major trading partners’ growth has continued above the average of recent years. While growth has eased in some economies, in the United States the recent fiscal stimulus has contributed to a further strengthening in growth. The outlook for major trading partner growth is for a gradual easing over the next two years. 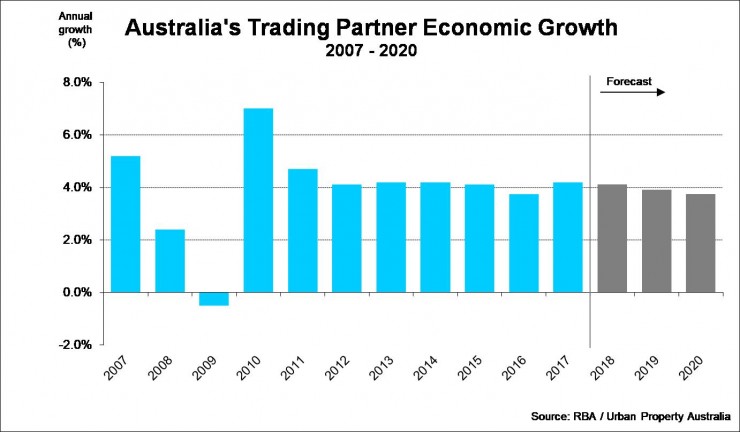 Growth in the United States is expected to peak at 2.9% in 2018, supported by the fiscal stimulus after eight consecutive years of expansion and still-loose financial conditions (despite some modest monetary tightening). Strong domestic demand has resulted in the unemployment rate falling to 49-year lows of 3.7% and wages recording their highest gains in nine years; which could encourage the Federal Reserve to raise interest rates again in December. Growth is expected to soften to 2.5% in 2019 as the recently introduced trade measures are implemented and as the fiscal stimulus begins to unwind. While the midterm election in November has brought back a divided US government, which will limit little major legislation, the president generally has the authority to act without congressional approval on trade measures. Therefore, given that the harsh trade restrictions against China appear to be popular with voters, the trade dispute between the US and China is expected to escalate in 2019.

The United Kingdom’s growth has weakened since the EU referendum with GDP expanding by just 0.1% in 2018, the slowest rate in more than five years. In contrast the UK economy grew by 1.9% in 2016, the year of the referendum, and 1.8% in 2017. Brexit-related headwinds have, however, been partially offset by the strength of the global recovery. Stronger global growth and a weaker euro/sterling exchange rate have already bolstered UK exports. The unemployment rate stands at a 42-year low and the number of employed people has reached a record high. While the United Kingdom’s planned exit from the EU is scheduled for March 2019, negotiations continue on the precise nature of the United Kingdom’s future relationship with the EU, resulting in further uncertainty for businesses.

The euro area is enjoying healthy growth, low inflation, falling unemployment, and low borrowing costs. The Euro area is on track to record economic growth of 2.0% this year as supportive monetary policy has encouraged consumer spending and job creation. But the overall balance of that mix is gradually becoming less favourable. Having peaked in 2017, economic growth is forecast to gradually slow further to 1.9% in 2019. Economic growth has been impacted by a number of factors including: higher energy costs which slowed discretionary spending, the rise in the value of the euro during 2017 has reduced export growth this year and concerns about trade tensions with the US have constrained business investment. 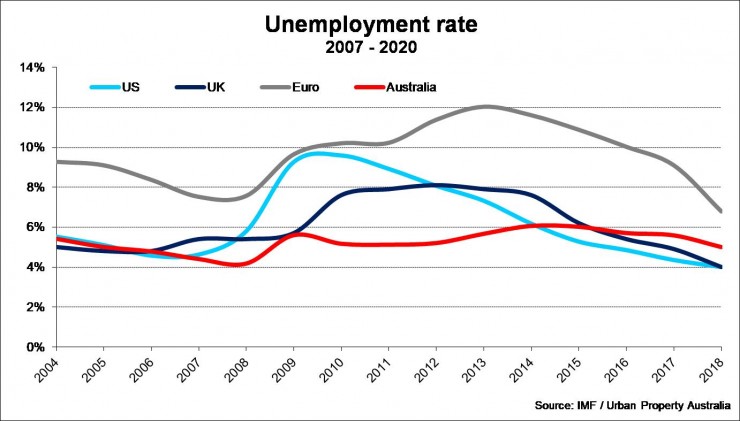 China’s economy appears to be slowing as retail trade and fixed asset investment eases at a time when credit expansion is slowing. Economic growth is projected to moderate to 6.6% in 2018 down from 6.9% in 2017 and is projected to grow by 6.2% in 2019, reflecting slowing external demand growth and necessary financial regulatory tightening. The escalating trade dispute with the United States is an undercurrent to several indicators that further point to a deceleration. Over the medium term, growth is expected to gradually slow to 5.6% as the economy continues to make the transition to a more sustainable growth path.

Growth is projected to remain strong elsewhere in emerging and developing Asia. India’s growth is expected to increase to 7.3% in 2018 and 7.4% in 2019. India’s economy appears to be recovering from the shocks of demonetisation and implementation of the goods and services tax aided by strong exports and gains in both business investment and consumer spending. India’s medium-term growth prospects remain strong at 7.8%, benefiting from ongoing structural reform.