Whilst the formal exit will take two years, the impact of Brexit is already being felt with a substantial increase in economic, political and institutional uncertainty. The IMF cut its forecasts for global economic growth this year as a result, while an already fragile business and consumer confidence was further dented.

Before the June 23 vote in the United Kingdom in favour of leaving the European Union, economic data and financial market developments suggested that the global economy was evolving broadly as forecast. Growth in most advanced economies remained lacklustre, with low potential growth and a gradual closing of output gaps. Prospects remained diverse across emerging market and developing economies, with some improvement for a few large emerging markets—in particular Brazil and Russia.

As a result of the outcome of the U.K. vote, which surprised global financial markets, the global outlook for 2016-17 has worsened, despite the better-than-expected performance in early 2016. Despite Brexit still very much unfolding, the International Monetary Fund, revised its global growth forecast down modestly. Brexit-related revisions are concentrated in advanced European economies, with a relatively muted impact elsewhere, including in the United States and China.

The International Monetary Fund also cut its outlook for U.S. economic expansion this year, citing a weak energy sector, a strong dollar and Brexit-related revisions. The IMF forecasts the US economy to grow 2.2% in 2016; however the US economy is forecast to improve to growth of 2.5% in 2017. Much of the recovery is forecast to be driven by domestic consumers with momentum gathering flowing from low energy prices, and the cheap imports boosted by good job growth. 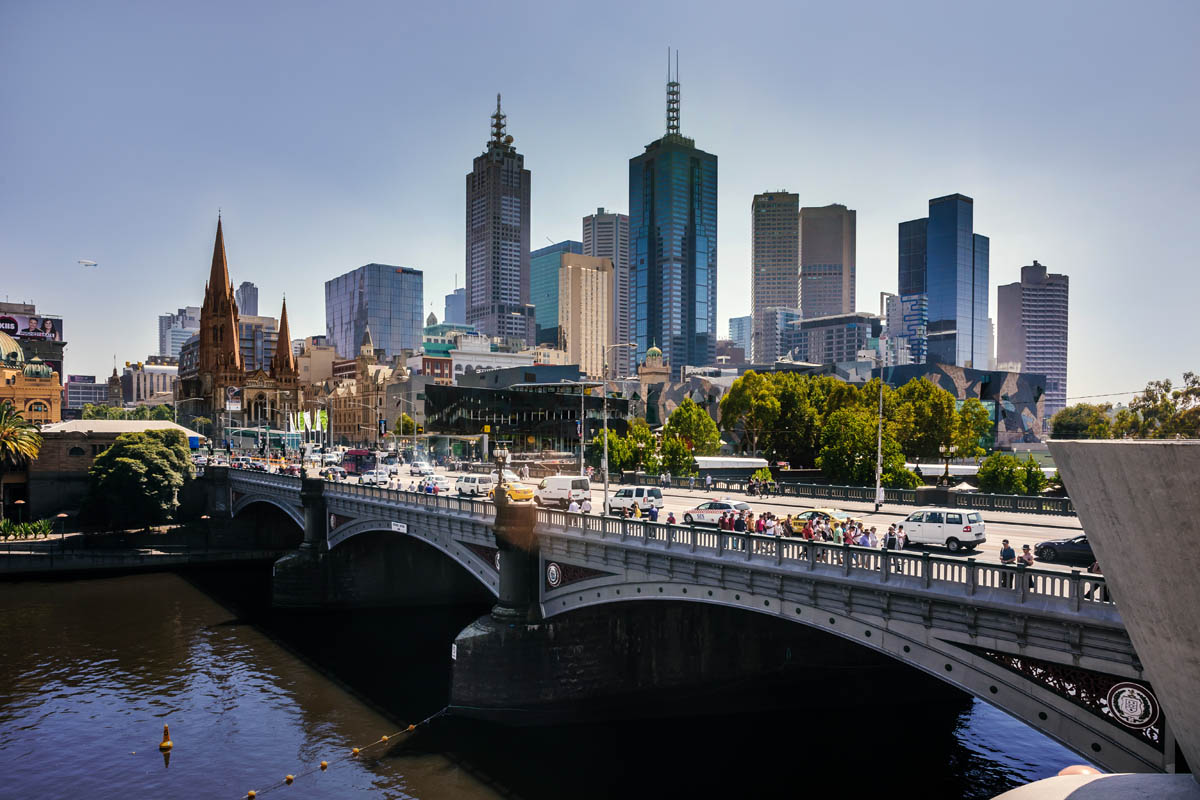 China’s exports and imports fell more-than-expected, reviving concerns over the economic outlook. In July, exports fell 4.4% over the year, while imports fell 12.5%. China’s economy, slowed to a 25-year low in 2015, as improvements in consumption failed to offset a marked slowdown in China’s traditional economic drivers. China’s economy grew by slightly more than expected in the second quarter of 2016 as the government increased infrastructure spending. China’s economy grew by 6.7% in the three months to June compared to a year earlier, indicating that the economy is stabilising. The direct impact of the U.K. referendum will likely be limited, in light of China’s low trade and financial exposure to the United Kingdom with China’s growth outlook is broadly unchanged as a result of the vote. Growth in China is expected to slow to 6.6% in 2016, down from 6.9% in 2015, reflecting the rebalancing of the country with growth of 6.2% forecast in 2017.

In the euro area, growth was higher than expected at 2.2% in the first quarter, reflecting strong domestic demand— including some rebound in investment. While forward indicators suggest to some moderation ahead, as a result of the U.K. referendum the potential increased uncertainty on consumer and business confidence has seen forecast growth revised down. Economic growth for the Euro area is projected to grow by 1.6% in 2016 and 1.4% in 2017.

In India, economic activity remains buoyant, but the growth forecast for 2016-17 was trimmed slightly, reflecting a more sluggish investment recovery. The outlook for other emerging market and developing economies remains diverse with many adjusting to lower commodity revenues. 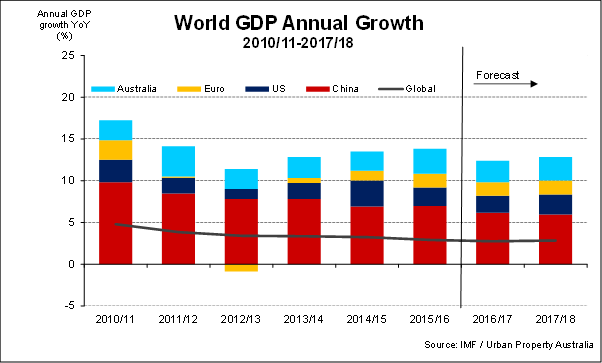 Low interest rates and the depreciation of the Australian dollar since early 2013 are continuing to support the rebalancing of economic activity towards non-resource sectors. Growth in GDP was stronger than expected in the March quarter, in large part because of a substantial rise in resource exports, which were boosted by unusually favourable weather conditions. More recent data suggest that real GDP growth was more moderate in the June quarter, as expected.

After a strong few months, business conditions and confidence stepped back in July, with confidence likely weighed down by the close Australian election result. Nonetheless, both measures remain around solid levels and point to ongoing economic and employment growth. Business confidence data indicates that tentative signs are emerging that the non-mining economic recovery is becoming a little more broad-based, which bodes well for the longevity of the improvement. Over the last 12 months, consumer confidence overall has increased by a healthy 7.4%, which has been boosted in particular by the general improving economic conditions but they are not as confident in their own financial position.

As expected the Board of the Reserve Bank decided to lower the cash rate by 25bps to 1.5%, a new record low, at its August Board meeting. Continued low inflation, a mixed labour market, and more confidence that housing was coming under control gave the RBA room to act. While the outlook for rates to remain on hold for the near future, given the RBA’s outlook of persistently low inflation further easing is a possibility albeit dependent on future inflation, labour market and housing market data.

Household consumption growth is expected to be close to its long-run average over the next two years. Looking forward, notwithstanding relatively weak income growth household spending is expected to pick up gradually as income growth improves and household saving ratio declines gradually leading to increased consumption. Dwelling investment has continued to grow strongly. While conditions in the established housing market appear to have eased since last year housing credit growth remains lower than a year ago, consistent with the tightening in lending standards towards the end of 2015 and the decline in turnover in the housing market to low levels this year.

Australia’s large east coast state economies are all now growing at or above trend. NSW, Victoria, and Queensland, which together generate more than 70% of Australia’s output, are now at multi-year highs. New South Wales remains ahead of the pack with growth in economic activity well above its long-run average. The pace of growth has slowed, as some indicators begin to turn, but momentum remains positive. Economic activity in Victoria and Queensland both improved solidly over the three months to October. Queensland is now growing at around its long-run average rate. However some risks remain as the housing outlook is weakening with softer house price growth which may impact on NSW and Victoria in particular where property market activity has been a strong support to growth. Conditions in Western Australia and South Australia remain weak, with economic activity in WA contracting further. 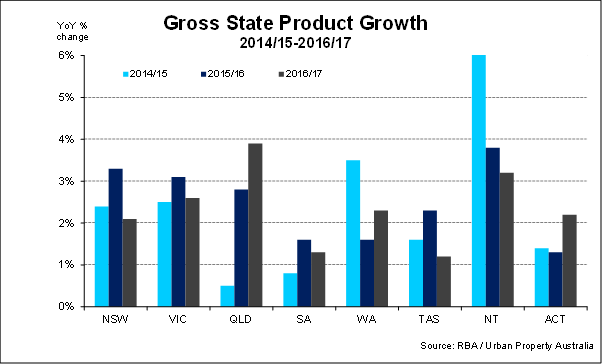 In 2016-17 Victoria’s gross state product (GSP) growth is forecast to remain above trend at 3%, reflecting solid business investment and household consumption, supported by low interest rates and continued strong population growth. Business investment grew strongly in 2014/15 and 2015/16, with growth in Victoria exceeding that of the national average for the past two calendar years. Growth is expected to moderate in 2016/17, yet still remain above trend, and return to trend in the following

Victoria’s population growth leads the nation. Forecasts suggest Melbourne could overtake Sydney as Australia’s most populous city in 2030. The government’s Victoria in Future 2016 report revealed other high-growth municipalities include outer southeast Casey which will expand by 170,000 people from 2011 to reach a population of 437,500 by 2031. In the west, Wyndham will grow by almost 200,000 to 361,400 and Melton by 154,000 to 266,000, according government forecasts. 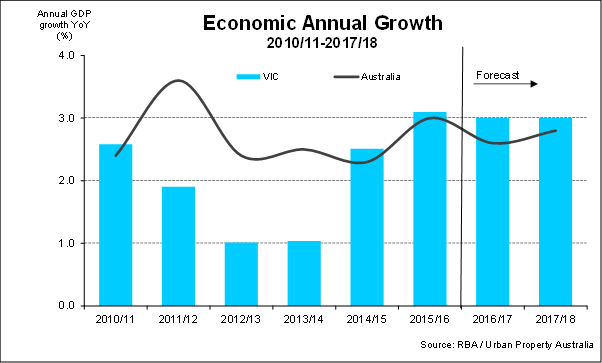