Economic conditions continue to improve in Queensland, with its economy growing by 2.2% in the year to September 2018, above its 10-year average. Queensland is attracting more people moving interstate than all other Australian states, indeed Queensland’s population is increasing at its highest level since June 2013. The lower Australian dollar has also encouraged an increase in tourist arrivals into the state, which has boosted consumer-related sectors.

Overall, the stronger economic performance has seen employment growth in Queensland remain above the national average since mid-2017. Interestingly, the greatest growth in employment in Queensland over the year was in the manufacturing sector. Despite the demise of the automotive assembly sector, the manufacturing sector has shifted to jobs for businesses in the food and beverage industry and companies making component parts for the transport industry.

Like other Australian cities, looking ahead, Queensland’s economy will be underpinned by infrastructure investment with the State government committing to an infrastructure pipeline of $46 billion over the next four years. 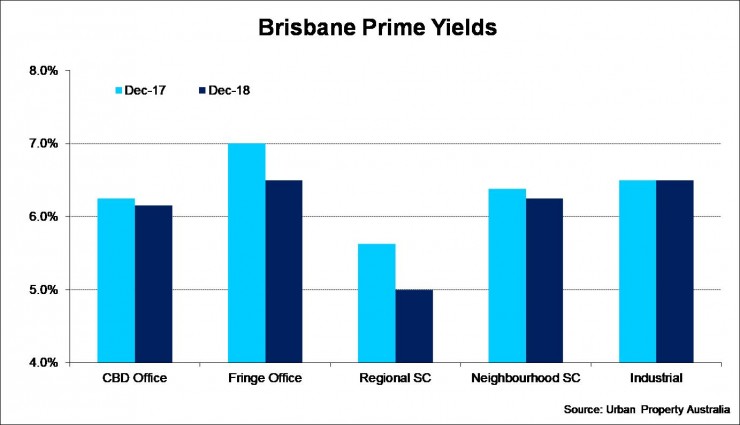 Investor activity in the Brisbane office markets has significantly increased over 2018 boosted by the economy and population growing at five-year highs. Transactional volume in the Brisbane CBD is on track to record the third highest annual volume ever, only behind 2007’s and 2013’s annual totals. Purchasing activity in the CBD was dominated by offshore buyers, accounting for 66% of these transactions by value. Outside of the CBD, Brisbane’s other office markets, sales volume has reached all-time highs with $1.4 billion transacted boosted by four assets selling in excess of $100 million.

Increasing occupier employment levels have resulted in CBD vacancy falling to 14.6% – its lowest level since 2014. Recent tenant activity has been dominated by some of Brisbane’s biggest private sector tenants (Suncorp, Telstra, QSuper and Westpac). 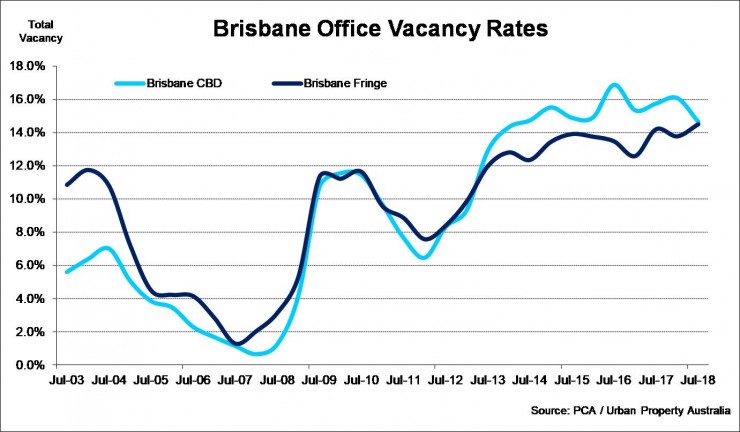 Retail spending in Queensland appears to have past the recent trough. Having contracted last year, Queensland retail sales increased by 4.1%, reflecting the improving state economic and labour market conditions. In fact, Queensland’s annual retail trade growth in 2018 was second only to Victoria. Queensland’s retail trade growth was broad based but surprisingly was led by clothing, which grew by 7.0% over the year, supermarket retail sales (5.3%) and hardware (6.3%) were boosted by the state’s improving population growth.

Queensland accounted for 18% of retail transactions across Australia this year with $1.75 billion sales recorded, lower than the preceding year, however in line with the 10-year average. Investors were focused on Neighbourhood shopping centres in 2018 which accounted for 42% of all Queensland retail sales ($748 million). The largest transaction of 2018 was AMP’s acquisition of the Gasworks Plaza from Aveo Group for $123.2 million on a yield of 5.1%.

Urban Property Australia recorded yield compression across all of Brisbane retail asset categories over 2018 aided by a lack of opportunities for investment. Regional shopping centres recorded the greatest yield compression through 2018 having tightened by 75 basis points to 5.0%. Although yields compressed across all retail classes, in contrast rents fell in Brisbane retail types over 2018 impacted by the soft retail trade conditions. 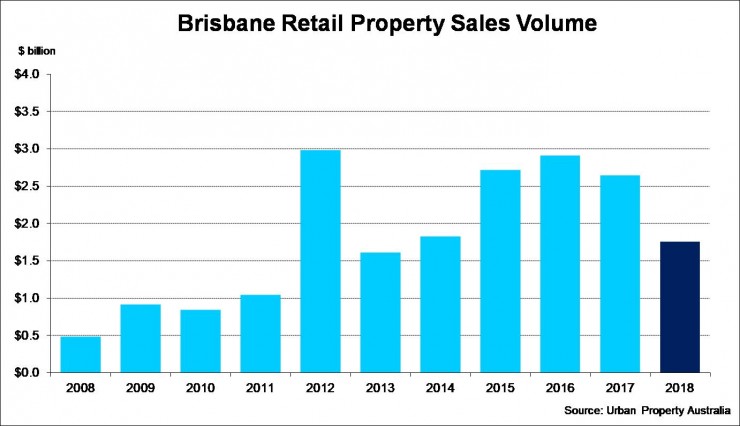 Tenant demand has been led by occupiers from the construction, wholesale trade and transport sectors. Brisbane industrial vacant space is estimated to have fallen to 3%, down from 4.2% a year prior. As demand continues to outstrip supply and vacancy declines, developers are becoming more confident with speculative developments, which are achieving strong leasing results prior to completion.

Despite the buoyant investor appetite, transactional volumes in 2018 has fallen to its lowest total since 2013. Urban Property Australia recorded $755 million worth of industrial property that has transacted in Brisbane, 14% lower than the total sales volume recorded in 2017. While sales activity has fallen in the Brisbane industrial market, the decline reflects a lack of available assets being placed on the market rather than diminishing investor demand. The strong investor demand is spreading over to secondary areas due to availability of value-add opportunities. The strong investor demand resulted in further increases in prices and compression in yields. 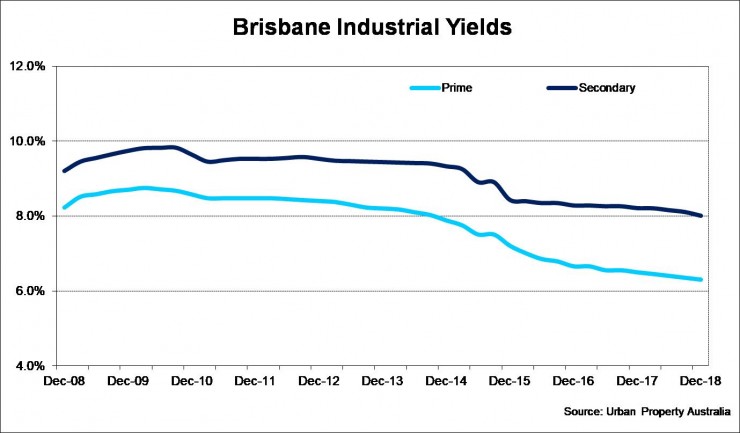