The change of state government for the first time in 16 years in March 2018 appears to have boosted business confidence in South Australia (SA). Business investment remains a key driver of SA’s recent economic growth, with a resurgent private sector surpassing government spending. Over the year to September 2018, SA’s economy grew by 2.7%, above its 10-year average of 2.0%.

Housing construction in South Australia continues to contribute strongly to the State’s growth as the industry works through its large and growing approvals pipeline. Unlike on the east coast, SA has not seen the same boom/bust price cycle, rather, price growth has been more modest with no declines to date. The recently announced land tax rates cut for higher-end residential and commercial property investors is also likely to further increase the attractiveness of the property market in SA.

The Australian Government’s decision to build a new generation of naval frigates and submarines in SA along with increased activity in the renewable energy sector is likely to support SA’s steady economic growth over the short term. 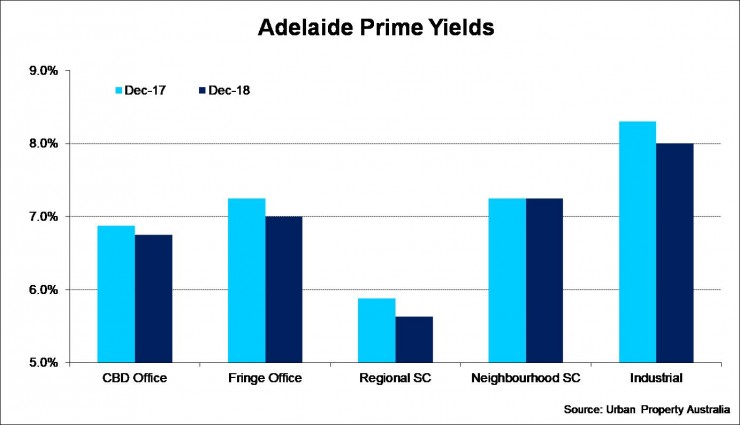 The abolishment of stamp duty on commercial property transactions has enhanced the investment proposition and contributed to a surge of sales in 2018. South Australia is the only state in Australia to eliminate this type of tax.

Interestingly the majority of assets transacted this year have been investors without any prior exposure to Adelaide. Sales activity across the Adelaide CBD office market in 2018 currently totals $630 million, almost double the $414 million transacted last year.

The total vacancy rate in the Adelaide CBD continues to fall, decreasing to 14.7%, its lowest level in two years. With no new buildings scheduled for completion over the next 12 months coupled with the decline of vacancies has resulted effective rental growth for both prime and secondary Adelaide offices.

South Australia’s retail sales grew 2.4% over 2018, while lower than the 4.2% growth of 2017, the state has been growing above the national average for the past four years. South Australia’s annual growth rate of retail spending is only behind Victoria and Queensland despite the relatively low population growth in comparison to the larger states. Retail trade growth through 2018 in SA has been underpinned by spending in food (2.6%) and trade in cafes and restaurants (0.7%). Growth in discretionary categories however has been mixed. Household goods spending has grown by 4.0% reflecting the solid gains in Adelaide house prices in contrast to Sydney and Melbourne. Whereas retail spending on clothing contracted by 5.5% in 2018 having grown by 10% last year.

Despite the overall growth of retail trade in South Australia, rents eased across all Adelaide’s retail categories over 2018 with UPA estimating sub-regional rents declining by 10%.

South Australia recorded the lowest sales volume for retail property over 2018 across Australia’s major states with $151 million transacted this year. The largest transaction of 2018 was ICAM’s 50% stake of the Churchill Centre North Shopping Centre for $42.5 million. 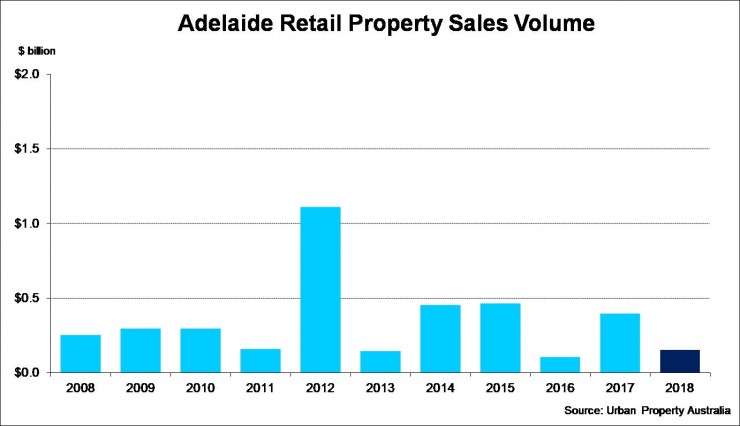 There is continued momentum building in the Adelaide industrial market. This has been underpinned by significant investment in infrastructure, increased defence spending, and improved conditions for mining and energy investment.

The $50 billion Federal Government funded submarine project has contributed to an increased level of enquiries and leasing demand, especially for large sites in the Inner North precinct. While the submarine has increased demand, impacted by the closure of a number automotive manufacturing facilities, vacancy in the Adelaide industrial market has increased to 4.8% up from 3.9%.

In 2018 to date, Urban Property Australia has recorded $315 million of total industrial transactions in Adelaide, above the 10-year average and 60% higher than last year. The increased sales volume may be attributed to stamp duty concessions, which were fully abolished as of 1 July 2018 on commercial transactions.